Com, because I saw it myself and, as a matter of fact, this article right here was inspired by a conversation I had in brandman network.Com a Few days ago, hey it was just a few people. It was like five artists and, like a manager, was chopping it up having a conversation right and this artist expressed that she didn’t like the fact that she could drop something and then just like a week or so later, people forget about it completely.

I don’t even know it existed or they’re just done. They moved on to the next thing and then I made me ask her: how long do you promo? I just thought about. Okay, how long do you push your stuff and then you know she answered and then I started to hear other people talk, and I really came to the conclusion that you know what a lot of people that I hear they don’t push. They don’t do their campaign as long enough, so how long enough is a good campaign? How long should you be working to push us your stuff? Well I’ll tell you this me personally, a lot of things, whether it’s my festivals, when I first started that when I was a little certain artists, just a lot of things, I do like three or four months, three or four months I’ll, just keep it at that Straight simple, three to four months, is how long I push things when I’m pushing out of security out of obscurity, and that means unknown to known and getting people to convert right, unknown to known and getting to people to version each of those are phases.

So you have to keep pushing because when people see something one time, that’s probably not the time that they’re really going to soak it in or check it out. I see articles by artists. They drop articles that I know, and I actually like that. I don’t even read the first time I see them when I’m like scrolling through YouTube’s, and things like that cuz. I might be on for a different reason. So you have to keep that in mind because alright, so I’m going to break a few things out.

This articles off the fly, but I want to make sure you get everything you can at least from this article in terms of doing it for three months, all right. First, the way I even learned this was like a harsh personal experience, probably like seven years ago. Now I don’t know but um I did a panel. I actually talked about this a blog, but I did a panel so I’ll keep it short. Three people who want to panel three CEOs were on the panel and yeah. 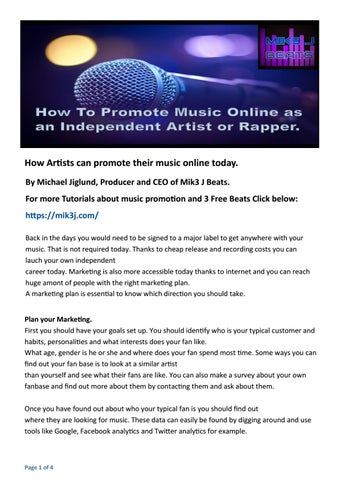 Four people showed up to the event three people in the panel and, like some legit CEOs were on the panel on within in tech industry, mostly so I’m music, but four people showed up three of those people that showed up. Quote-Unquote was me and two people who are helping me me and two people that were helping me that third one was a, I mean the fourth one was a guy will just randomly walking by. I was like yo.

What’s going on, oh snap, this is dope. I’m going to get in so why was that for me? First of all, I didn’t put enough effort into marketing that particular event. This is where I go by the 10x rule that Grant Cardone talks about so much. So it’s a great book or just hearing him talk about that concept. For y’all we don’t know, but the rule is basically most of the things like it’s not this whole inspirational thing.

Yeah you want to 10x your life, that’s cool, but the the the part that I love it. The meat of it is most of the things that you’re trying to achieve are going to likely take 10x. The effort that you think it’s going to take. Why? Because you actually don’t know how much effort is going to take so you’re planning and say I’m going to do this this and this, but you haven’t done it before so you don’t know how the effort that it actually takes all right, so kind of plan.

For that and the reason that event you know I had some successful events a couple of days before in a couple days afterwards, which was a second lesson for me personally, but because I did have some except successful events. I was actually surprised to have like one of my first huge, huge failures, but part of that was because of resources right trying. That’s what I talked about focusing in on, where you want to put people’s attention to and where I learned that personally, because I had 300 people show up to this one thing: hey 120 people show up to this other thing, and then I had four people show Up to this other thing that I would have preferred most of the people show up to that like for real for real, so, but I didn’t have the resources to market that, like, oh, okay, I didn’t have the resources to market all three well right, so you Have to be able to understand the resources that you have at the moment to to you know, determine what you’re going to direct people’s attention to that’s another thing now, when we talk about this three months situation, everybody doesn’t have the resources to do it three months, Because we need the consistent, real legitimate push happening for three months.

How do I do three and four week pushes all right and now let me see if I could try to extend it to two months and then continue to grow your plan. That way, because maybe you can’t wait till you have a lot of money every single time like maybe only you’re going to take you’ll only be able to do it like once a year. If that’s your situation, I don’t know what the situation is, but what I can say if a lot of artists will find themselves in better positions a lot of times, especially when you’re, like no connections you’re in your room.

You’re is really just you. You’ll find yourself in a better position. Is if you take time you strategize you build up your resources, you get your catalog, you get you all your promo together, you get like all the money. You know you save a lot of money for the budget right, you don’t just! Oh I’m going to throw out $ 50 here and throw out $ 50 here, like that. That’s cool with your testing. But when we’re talking about your campaign and trying to build to actually make sure things get like traction, then you’re better off saving all that money and then being intentional about where you spend it.

We go a buzz it’s because all a lot of energy in a concentrated area right is going to have a greater impact. Let’s keep it at that. So please consider lifting your campaign. I don’t care. If it just means you can only do it two more weeks and usual, and maybe that’s going to make you think differently as well. It should because now you have to get creative well. What can I do to do a little bit of this or to keep things going? If I don’t have the money to bring four or maybe I need to wait an extra two months before I even drop this project because who’s waiting on the project most likely like, especially if you’re starting from nowhere right, nobody’s waiting on the project.

It’s only Hubie Nancy about getting it out. That’s why patience right is a huge thing we hear so many people talk about patience and mindset and all that stuff and patience, patience, patience. Well, it’s a real thing. If you talk about executing correctly, because this plan and extending the plan and making sure you put the right amount of effort, energy into the plan is literally that’s that’s the part where people win.

So many people have information and right read these reading these articles and things like that, but the execution is where it’s all one at the end of the day, that’s just what it is so I’ll leave this article that once again this was on the fly. I don’t want to add too much other information and random stuff, maybe we’ll get in deeper to some of that type, some of that strategy and planning in another article but uh yeah other than that.

Once again, this article is brought to you by brain man, network.Com cuz. I signed myself if you like this article, go ahead like better, maybe like in my school shared, not subscribed, you know what to do. Get-Get subscribe,